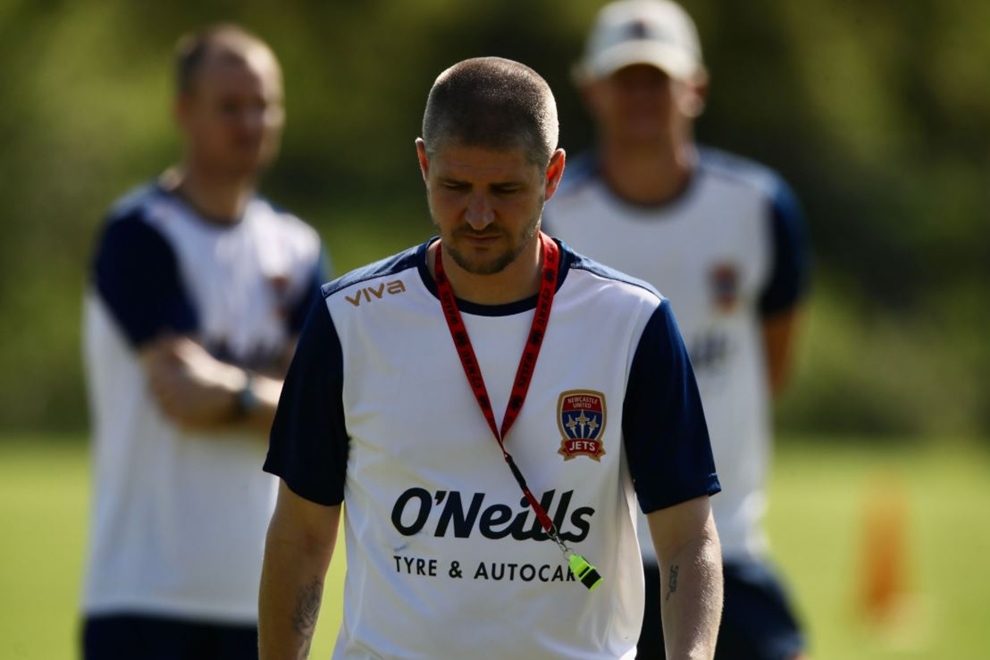 Instilling belief and encouraging his side to play with freedom are a couple of the key goals new coach Carl Robinson believes will help Newcastle Jets turn their season around.

Robinson took charge of his first session as Jets boss on Tuesday following his appointment on a three-and-a-half year deal last week.

The Welshman takes the reins after watching from the stands on Sunday as the Jets snapped a nine-game winless run with a 4-3 F3 Derby win over Central Coast Mariners.

The long-awaited victory, coupled with Robinson’s arrival, has lifted the mood around the club as they look to salvage something from a tumultuous season so far.

Robinson is under no illusions at the size of the task ahead but was confident he could have an impact in the Hunter.

“I’ve moved to the other side of the world because I believe I can make a difference and I can help Newcastle Jets. And I believe in the players,” Robinson told reporters.

“My job is to make them believe in themselves because I think they are a very good group of players.

There were enough signs in Sunday’s thrilling win over their local rivals to suggest the Jets have it in them to resurrect their 2019/20 campaign.

Carl Robinson addressed the media this morning after his first on-field session as Head Coach, looking back on the weekend's #F3Derby win over the Mariners! #MadeOfNewcastle

The performance of the likes of Dimitri Petratos, Roy O’Donovan and Abdiel Arroyo in attack has Robinson excited about what he has to work with.

But the display also outlined to the former Vancouver Whitecaps coach the areas his side must improve if they want to be a Hyundai A-League force.

“Whenever you concede three goals it’s not ideal. Two off set pieces which were very avoidable and the third was a wrong decision by the goalkeeper,” Robinson explained.

“When you do that you are going to have to accept the bad with the good, mistakes happen.

“It wasn’t punished on the weekend as we won the game and deservedly so but we have to tidy that up if we’re going to climb up the table.”

Asked about fringe Socceroo Petratos, who scored an impressive double against the Mariners, Robinson said: “I think I can get Dimi to another level.

“He needs to believe in himself, because he’s certainly got a coach that believes in him and wants to push him.

“I said to him that’s what you’re in the team to do. If I’m going to play this way and you’re a number 10 or a second forward behind a number nine, then I need you to be proactive rather than safe,” Robinson added.

“My job is to get the best out of Dimi Petratos as well as all the other players, but he needs to believe in himself. He needs to get back to where he was but it’ll take hard work.”

Robinson’s first match in charge of the Jets comes on Saturday night with a clash against Western Sydney Wanderers at Bankwest Stadium in a clash both sides need to win to keep their Finals Series hopes alive.