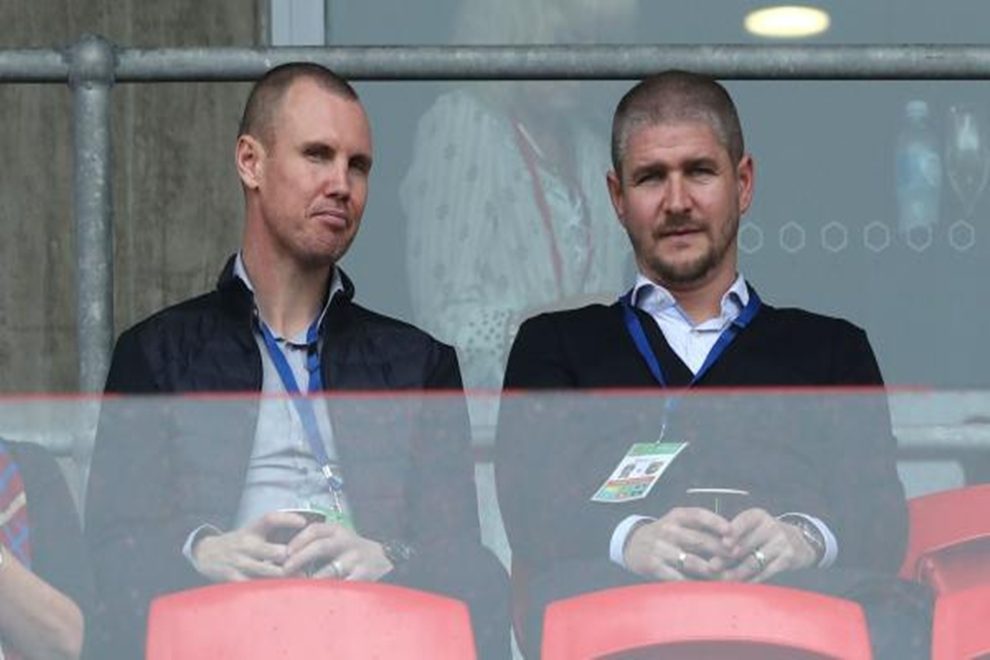 Newcastle Jets claimed F3 Derby dominance in the final match before new boss Carl Robinson takes the reins in the Hunter – so did that dramatic triumph kept their season alive?

All the talk heading into a rain-drenched derby on Sunday was about the returning Roy O’Donovan, but Dimitri Petratos proved to be the match-winner in a seven-goal thriller to mark Craig Deans’ last act as interim head coach.

New chief Robinson watched from the stands alongside assistant coach Kenny Miller as Newcastle let a two-goal lead slip away, before scoring two more goals and hanging on to what could end up as a crucial three points for the Jets.

The win lifted Robinson’s side level on points with their New South Wales rivals but the signs were evident at a soaking wet McDonald Jones Stadium why the Jets are bottom of the Hyundai A-League ladder, as defender Bobby Burns expressed post-match.

Deans guided the club to four points from five matches in his month in the hot seat following the sacking of Ernie Merrick but, despite the morale-lifting victory on Sunday, their Hyundai A-League Finals Series hopes hang by a thread.

Robinson needs to claw back a nine-point deficit and overtake five other teams in the final 10 matches to save Newcastle’s season but Robinson was bullish about the Jets’ Finals Series chances while speaking to Fox Sports.

Robinson added: “I will look to maybe add one or two if I can. But I will have a good look at these players because they are a really good group of players and they are a together group, which is important.

During the final weeks of his tenure, Merrick bemoaned that the absence of pivotal players Nigel Boogaard, Abdiel Arroyo and Wes Hoolahan was leaving his side short of experience throughout the spine of his line-up.

Now that Boogaard has returned, marquee signing Hoolahan is edging closer to finally making his Hyundai A-League debut and O’Donovan has been recruited to add firepower, Robinson will have tools at his disposal that Merrick never did in the 2019/20 campaign.

O’Donovan made his Jets return on Sunday after cutting his time at Brisbane Roar short.

Robinson was Vancouver Whitecaps head coach for six seasons between 2013 and 2018 – with assistant Miller playing for him in two of those campaigns – and he gained success with significantly smaller budgets than his leading Major League Soccer rivals.

With a direct, counter-attacking, physical style of football, the Welshman masterminded second and third placed finishes in the MLS Western Conference (with the seventh and eighth biggest salaries respectively) and he delivered the ‘Caps first Canadian Championship. A year after his departure, Vancouver slipped from 14th in the overall standings to 23rd.

Robinson is under no illusions that there is work to do in the Hunter and he has little margin for error, especially with the kind of mistakes the Jets have allowed to creep into their game all too often.

“I thought [the Jets] were terrific with the ball. I thought there was a number of chances in which they let go which they could’ve scored five, six, seven goals on a different day,” Robinson said.

“Three mental lapses obviously allowed Central Coast to stay in the game, which [would have been] a little bit unjust if it would have ended 4-4, but other than that – lots of positives.”

A loss Adelaide United fans will quickly want to forget was capped off by a sparkling substitute appearance by 15-year-old Mohamed Toure – the younger brother of Reds’ breakout sensational Al Hassan – who became the third youngster player in Hyundai A-League history.

Mohamed is four-years the junior of his Australia U-23 international sibling and he showed remarkable poise, confidence and skill in his eight minutes on a water-logged Suncorp Stadium pitch after being throw in the deep end during the closing stages by head coach Gertjan Verbeek.

However, do not hold your breath on seeing the schoolboy sensation week-in, week-out, according to Verbeek, who is expecting George Blackwood and James Troisi to be available next week to threaten Toure’s place on the bench. But he is certainly an electrifying young prospect to keep tabs on.

Robbie Fowler’s Brisbane came out on top, 2-1, with Mirza Muratovic and Tom Aldred notching their first Hyundai A-League goals as the Roar coach played down talk about his efforts to recruit Reds goalscorer Ben Halloran.

With just one defeat in their last seven matches, sixth-placed Roar are now well positioned to tighten their grip on Finals football in the coming weeks – an impressive recovery after they slipped to 10th place following Round 12.

With Diego Castro fast on the mend from a knock which has kept the Spanish maestro out of Perth Glory’s past two matches, Tony Popovic will be spending the bye week scheming how to fit four players can into his three-pronged attack.

Nick D’Agostino gave the Premiers’ head coach food for thought with a match-winning double in the 4-2 Distance Derby triumph against Wellington Phoenix, backing up his 90th-minute equaliser last week which rescued a point against Melbourne Victory.

Joel Chianese and Bruno Fornaroli have developed a strong understanding since the Uruguayan hitman’s arrival in Western Australia and, with the AFC Champions League looming large, Popovic may need to shuffle the pack to accommodate the Olyroos’ hero D’Agostino.

English striker Gary Hooper sent his coach Ufuk Talay a message that he should be in the starting line-up, scoring twice within 20 minutes of coming off the bench, but Tim Payne’s red card curtailed the Kiwi club’s comeback at HBF Park, as Fornaroli had the final word to bring up double figures for the season.

Berengeur steals the show with as City finally topple Victory

While the Sydney Derby succumbed to the storms swirling around the Harbour City, Melbourne City made up some ground on runaway Hyundai A-League leaders Sydney FC by finally winning ‘the big one’ against crosstown rivals Victory.

French enigma Florin Berengeur delivered his first stand-out performance in a City jersey with a goal and a sweet back-heel assist for Jamie Maclaren, which should be a goal of the season contender for the slickness of the build-up alone.

Socceroos striker Maclaren’s 14th goal of the campaign puts him one behind Adam Le Fondre in the Golden Boot race as Erick Mombaerts compromised his ball-possession philosophy to pull the wool over Carlos Salvachua’s eyes.

The Spanish chief believes the Navy Blue need to win ‘six or seven’ of their nine remaining matches to make the Finals Series – a big ask with star forward Robbie Kruse set for up to eight weeks on the sidelines with a hamstring injury.