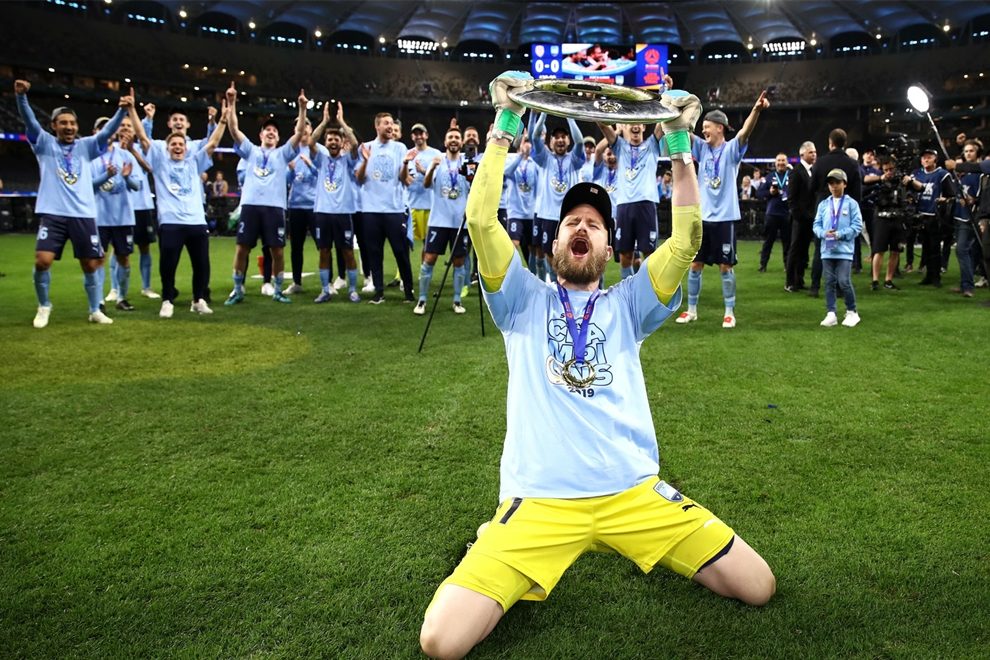 Sydney FC goalkeeper Andrew Redmayne admits he would like to pursue an overseas move in the future but will remain a Sky Blue after re-signing for the next two seasons.

The 31-year-old has been one of the Hyundai A-League’s outstanding shotstoppers after making a cross-city switch to Sydney from rivals Western Sydney Wanderers three years ago.

In 2019, Redmayne continued his rise as one of Australia’s premier gloveman, helping Sydney win their fourth Championship in a penalty shoot out win over Perth Glory and making his full Australian international debut against Korea Republic.

“The last three years have been the best and most enjoyable of my career and I am very happy to be extending my stay at Sydney FC,” he told the club website.

“There’s no other club in Australia I’d rather play for and I feel I still have a huge amount to offer and improve on here.

“I believe we are beginning a new chapter for myself and for Sydney FC, and I’m looking forward to it immensely.

“Ultimately I would like to test myself overseas, but for now I want to continue to achieve success at Sydney FC.”

Redmayne served as understudy to Socceroo Danny Vukovic after signing on for Graham Arnold’s men in 2016 but made the number one jersey his own in 2017/18 when Vukovic departed for Belgian heavyweights Genk.

“Andrew has been outstanding for us. There’s no doubt in my mind that he is the number one goalkeeper in the A-League and I’m delighted that he will be playing at Sydney FC,” said Sydney boss Steve Corica.

“He has been one of our most consistent players during our recent successes and fully deserves his national recognition as well.”

Sydney have tied down Milos Ninkovic, Michael Zullo, Paulo Retre and boss Corica to contract extensions over the last month.

It is expected that club are going to announce further re-signings in the near future, and are confident that list will include the name of striker and Golden Boot leader Adam Le Fondre.

‘There’s no doubt in my mind that he is the number one goalkeeper in the A-League’, Corica says of Redmayne