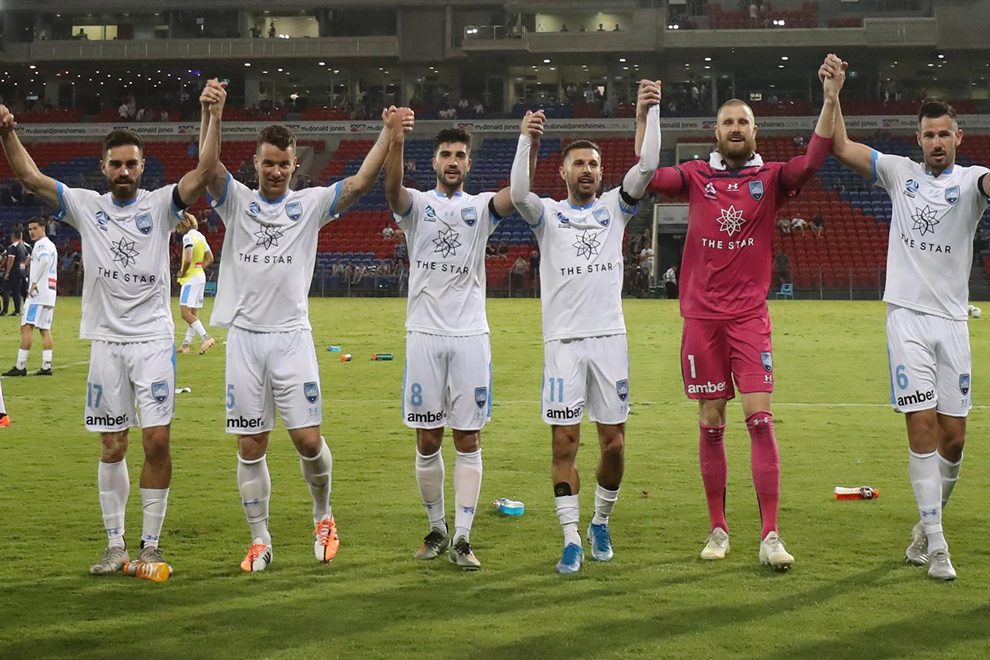 Sydney FC’s Premiership rivals’ task will only get harder with Sky Blues boss Steve Corica confirming he expects to be able to field a full-strength side again next month.

Sydney notched their tenth straight Hyundai A-League win on Friday night with a 2-1 result over Newcastle Jets to move 12 points clear atop the league table.

All the more astounding, that run of results have come despite the Champions being forced to manage an injury and suspension hit squad throughout a busy summer period.

Fullback Rhyan Grant and midfielder Luke Brattan were both absent from the trip to the Hunter with suspension, while Brandon O’Neill, Luke Ivanovic, Chris Zuvela and Ben Warland also continue their injury recoveries on the sidelines.

However, with his side now taking a fortnight’s break from competitive action with a Round 15 bye, Corica is confident he will again have a full complement of players at his disposal in what looms as a busy February as the club also turns its focus to the AFC Champions League.

“At the moment we’ve got probably seven players out,” Corica said.

“We will be getting Brattan back and Rhyan Grant back next time very soon. We’ve got Benny Warland, who has been a long term injury, with Zuvela all coming back in February.

“By February we will have a full strength side leading in to the Champions League period.”

Despite claiming the three points, Sydney’s attack were largely stifled through the second half of the contest at McDonald Jones Stadium as the Jets piled on the pressure in search of a result.

However, Corica said he felt his side’s second-half approach was pragmatic in the warm conditions after taking a similar tack the week prior at home to Adelaide United in stifling heat.

“I think the conditions again were extremely hard to play in and that’s two weeks in a row,” Corica explained.

“I think last week it probably took a little bit out of our boys and to back it up again we had to drop a little deeper but they defended really well.

“[The Jets] put numbers forward and put numbers in the box and we dealt with it. They had one chance that hit the crossbar in the second, otherwise I thought we defended deep but well.”

The win comes despite the match being the third in their last five that the Sky Blues have been held scoreless in the second half.

“Sometimes you have to see out the game. We don’t have to score five goals or three goals when we are in front. They have to come to us,” Corica said.

Contrasting with the Sky Blues winning momentum, interim Jets coach Craig Deans conceded there is plenty of work to be done if his side are to move off the bottom of the Hyundai A-League table in coming weeks.

He also acknowledged his side’s preparation was severely affected by the departure of ex-Head Coach Ernie Merrick earlier in the week.

“This week was more just about trying to clear the air and get people re-focused,” Deans explained.

“Unfortunately, I have been in this situation before so I was able to reflect back on how to cope with it. I am just looking forward to a week without too many disruptions.

However, reflecting on the performance, Deans said he sees plenty of positive signs in his charges taking the contest to Sydney until the final whistle.

“I think with the ball we were pretty comfortable in possession. We got into dangerous areas, we had enough shots and crosses to cause a lot of trouble for Sydney,” he said.

“It’s just a matter of being clinical enough in taking them and that is just a work in progress I think. It has been all season from what I’ve seen and it just needs to continue.

“I thought the effort was excellent. I don’t think you could say there was a player out there who didn’t put one hundred per cent in right until the end.”

Source:Sydney will be at full-strength by February, says Corica
#Wyndham #Wyndham Media＃云登市＃云登传媒