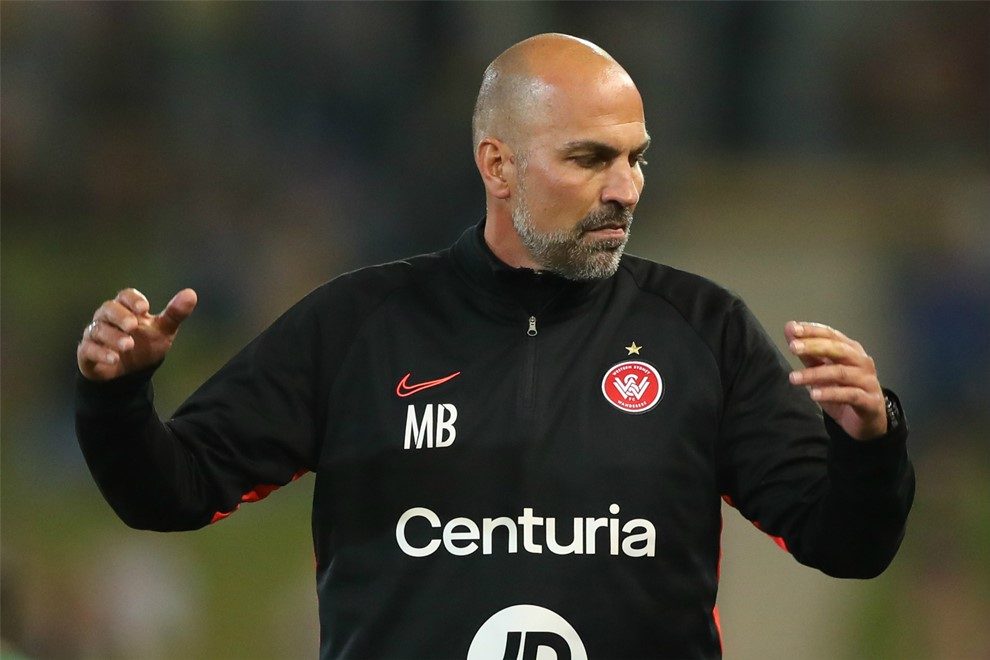 A frustrated Markus Babbel believes his Western Sydney Wanderers side have hit a fork in the road, with the path his players decide to take to determine the fate of their 2019/20 campaign.

After going unbeaten for the first four rounds, Saturday night’s 2-0 defeat to Newcastle Jets was the Wanderers third loss in a row.

While the Wanderers were excellent for much of the second half and created enough chances to win the match, their display in the first 45 minutes was a concern for Babbel.

“It’s frustrating because first half we weren’t on the pitch. We didn’t do what we wanted to do, it was more or less freestyle,” the German coach told reporters after the match.

“I said at halftime ‘it’s not working. If you follow our structure, if you follow how we want to play, we will create chances, we will dominate them’ and that’s exactly what happened.

“Then in the last 15 minutes we dropped back into the old situation and then you concede goals.

“We have to learn from our mistakes. I have to speak to the boys because for me we have two options.

“We can go the freestyle way where I don’t think we will have success, but if we follow our structure then there’s a good opportunity there to get results again.”

Babbel says “it’s a mystery” why his players aren’t following the structure set-out by the Wanderers’ coaching staff.

“If we follow our structure we would be so much better. On the pitch as a team and individually we have so much more quality,” Babbel said.

“It’s a tough period at the moment but it’s our fault, no one else’s. We have to work harder and listen more to the little details of a match.

“It’s not to do with skills or talent, it’s just a decision, ‘I want to do it or I don’t want to do it’. If we are ready to do it we will get the results no worries.”

Western Sydney Wanderers go across the ditch to play Wellington Phoenix in their Round 9 clash at Eden Park, Auckland, at 5pm AEDT on Saturday, 7 December.

WATCH: All the highlights from the Jets’ win over the Wanderers

While the Wanderers appear to be on the slide, it’s the opposite for Newcastle who have recorded back-to-back wins and clean sheets.

There were a few pundits willing to write the Hunter club off after going winless in their first four games but they are now only outside the top six on goal difference, and with a game in hand.

“I felt as though we have been playing good football apart from the Sydney game,” Merrick said of his side’s start to the season.

“But I thought tonight we put two halves together pretty well. Ok, we might have had a poor start to the second half but we came strong again.

“That’s the good thing about this team they are strong finishers. It was a more complete performance this week.”

The Jets celebrate their win with the fans

oung gun Angus Thurgate was the Jets’ hero for the second match in a row, coming off the bench to score his side’s opener before an unselfish assist for Dimitri Petratos’ match-sealer.

Asked about the impact of the player known as ‘The Port Macquarie Pele’, Merrick said: “He’s very fit, technically very good, he’s extremely coachable and for a youngster he reads the play well.

“He’s always looking for a pass and a second ball. Now the little fella has put me under a lot of pressure for a starting run next week.

has put me under a lot of pressure for a starting run next week.

“He’s come on done a great job so it’s given me some thinking to do for the Adelaide game next week.”

Newcastle Jets play away at Adelaide United on Sunday, 8 December in Round 9. The match at Coopers Stadium kicks off at 6pm AEDT.