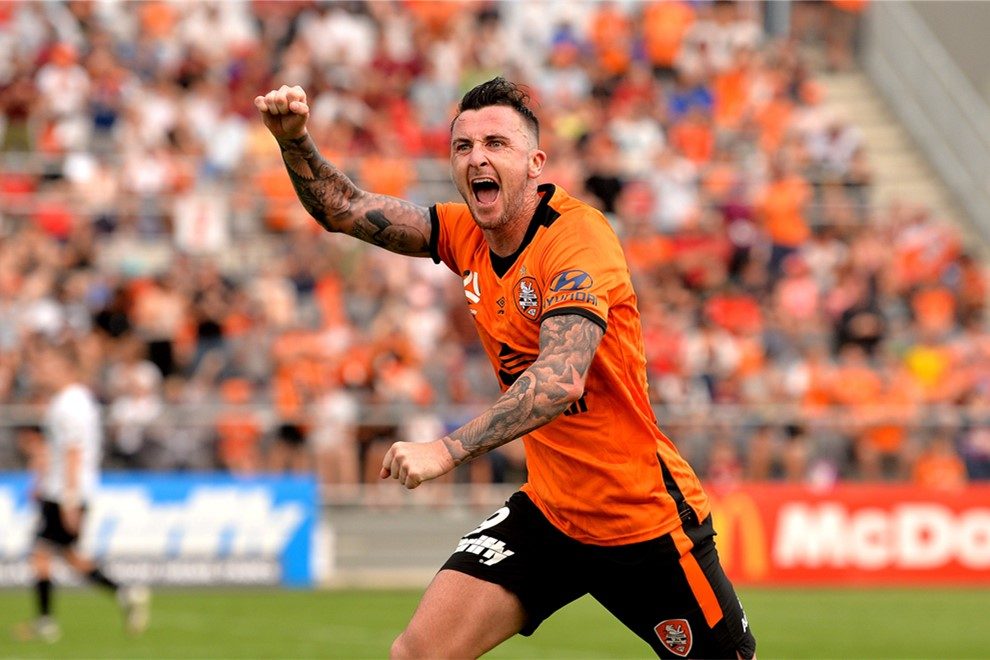 Roy O’Donovan is seeing a noticeable lift in his performance thanks to the incessant efforts of Roar boss Robbie Fowler to improve his game.

Brisbane moved into the top six after their 2-0 win over Central Coast at Suncorp Stadium on Saturday and it was O’Donovan who put the Roar ahead in the game, getting low to poke home a Dylan Wenzel-Halls cross on the hour mark.

It was his fifth goal of the 2019/20 Hyundai A-League campaign, taking him to third in the race for the golden boot behind Riley McGree (six) and Jamie Maclaren (nine).

O’Donovan says his burgeoning relationship with Liverpool’s former star striker Fowler has him itching to improve and continue scoring as many goals as he can.

“He puts me under the most pressure of anyone, which is great.

“He wants to input his coaching style on you, and for little movements around the box he’s great, and it’s great for me.

“It sharpens my senses, keeps me on my toes, takes me out of my comfort zone, and so far so good. He’s a great guy.”

O’Donovan is relishing working under his new boss

O’Donovan and the Roar moved into the top six after the win which was capped off by Scott Neville’s first goal for the club just minutes after O’Donovan broke the deadlock.

But despite the positive result an alarming trend continued for the Roar: an inability to score first-half goals.

Brisbane have scored eight goals this season – all in the second half of games – but O’Donovan says there is plenty of time for the new-look Roar to address the issue as the season progresses out of its relative infancy.

“We’ve been slow out of the blocks all season, that didn’t change today,” O’Donovan said.

“We probably should have been a goal to the good at half time but we stuck at it, it’s a warm day in Brisbane but we ground it out, and in the end we’re winners.

“We have 14 new players, a new coaching staff and all the excuses you want really, but we really just need that goal in the first half and we won’t think about it ever again.

Brisbane moved into the top six after beating the Mariners

“We’ve got a really good bunch of lads so when it does click I think we’ll be really good, it just hasn’t quite clicked yet, but we’re getting results.

“We signed some good players. Very resolute, tough guys from overseas and if we can stay in the game we can create chances.

“Brad Inman and Dylan Wenzell-Halls tonight I thought were outstanding.

“With players like that who are young with energy and pace, it’s great for me and if a chance falls my way I hope it hits the net, and it did tonight thankfully.”

Brisbane Roar travel to Sydney FC in Round 9, in a match played on Saturday, 7 December at 7.30pm AEDT at Netsrata Jubilee Stadium.
Get your tickets here
Find out more at the Match Centre here

After their Round 9 bye, Central Coast Mariners play away at Sydney FC on Saturday, 14 December. The match at Nestrata Jubilee Stadium kicks off at 7.30pm AEDT.
Get your tickets here
Find out more at the Match Centre here

Source: ‘He doesn’t leave me alone’: Pestering Fowler getting the best out of O’Donovan
#Wyndham #Wyndham Media＃云登市＃云登传媒

‘It was basically freestyle’: Wanderers pay for no structure says Babbel
‘I had five tears down my right side’: Gallifuoco’s painful journey to become a Mariners hero
Comment