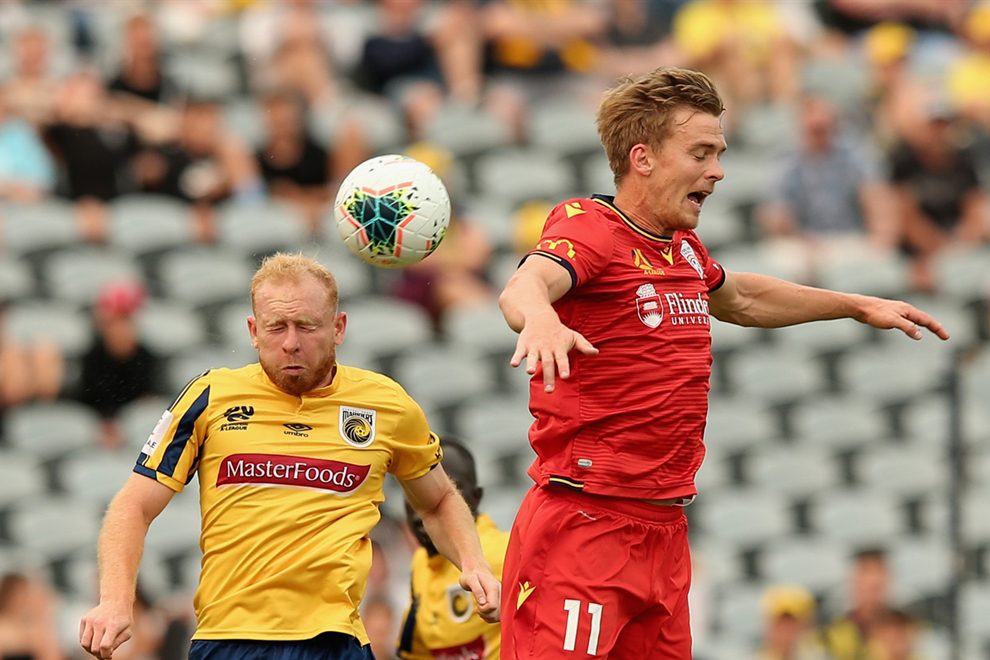 It should have been a day to rejoice for Kristian Opseth, who opened his goal scoring account for Adelaide in the Hyundai A-League against Central Coast Mariners last weekend.

Instead, the Norwegian striker was left ruminating over a botched penalty attempt.

Find out how Opseth reacted in the aftermath of his penalty miss, plus hear from new Central Coast Mariners signing Jair, Sydney FC maestro Brandon O’Neill and more.

‘Penalties should be a goal’: Opseth pressures himself to improve

The Norwegian did secure his first Hyundai A-League goal in last Saturday’s 3-1 win over the Mariners, but his missed penalty in the second half has been playing on his mind this week.

“My plan was to go straight down the middle but lift it a little more than I did,” Opseth said.

“I felt when I hit it, it wasn’t exactly how I wanted it, I looked up and he saved it.

“Of course I’ve been thinking a bit about it after. A bit of trouble sleeping because of it, but that’s how it should be.”

Opseth will now look to put the penalty miss behind him and continue to improve his game as the Reds host Melbourne Victory at Coopers Stadium on Saturday night.

“I’ve heard it’s the biggest game of the year so I’m really looking forward to playing in it,” he said.

“Rivalries are always the most fun games to play.”

Jair settles in at the Mariners

New Central Coast signing Jair hopes to put his frustrating stint at Newcastle behind him as he settles into life under Alen Stajcic at the Mariners.

“I feel good here, I’ll just follow this path to write a new chapter in the A-League and hopefully enjoy the league this season, and build a stunning season with the boys,” Jair said.

“The guys are giving me important support.

“It’s not easy because I’ve been waiting for my visa but hopefully I’ll be ready for next weekend.

“We started very well this season but our last two games was hard about the result.

“We are in the process and hopefully next weekend we take a positive result.

“It’s not easy but it’s a new challenge, I’m here for that.”

Sydney FC midfielder Brandon O’Neill says his side are out to put a stake in the ground to their Hyundai A-League rivals with a win over Perth Glory this Saturday.

O’Neill sees the clash – a rematch of the Hyundai A-League Grand Final 2019 – as an opportunity to one-up their WA rivals in the race to make it to the big dance again this season.

“We want to make the Grand Final this year and go on and win it like we won last year, and this game is just a normal game for us and one we want to win.

“It’s always a challenge going over to Perth, they’re a good side, they play good football but we’re heading over there quietly confident in what we can do this weekend.”

City conceded late goals to Wellington and the Mariners prior to squandering a two goal buffer in last Sunday’s 4-3 defeat to Brisbane Roar.

“I think it was more of a mentality thing in the second half, and we lost control of the game,” Brillante said of his side’s collapse.

“We knew form the last couple of games where I think we got lazy in the last 10 or 15 minutes of the game.

“It’s not a good habit to get in to and it affected us last game, so we’ve got to practice on the pitch to not have the mentality to do that.”

City boss Erick Mombaerts has also noticed the concerning trend, but said there might not be a quick fix for the issue.

“I’m sure we can improve our defensive style,” Mombaerts said.

“Sometimes it starts with a lack of mental strength, for example concentration or aggressiveness, something like that.

“But also it’s continued with maybe tactical mistakes for example.

“We have also good strength, because we are one of the best teams now with our offensive style of play.

“In my position I need to find solutions to help the player be stronger mentally, individually as well as collectively.

“I’m sure tomorrow we will be stronger than we were in Brisbane.”