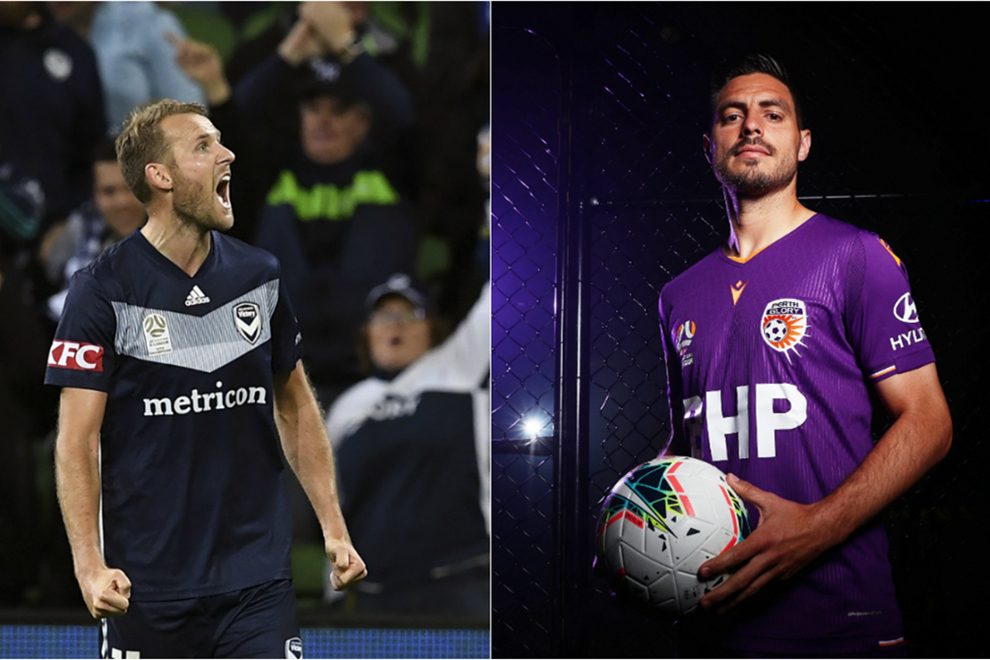 Their respective clubs may not be at the peak of their powers so far in the Hyundai A-League 2019/20 Season but Ola Toivonen and Bruno Fornaroli could hit significant goal-scoring milestones this weekend.

When it comes to sharpshooters in the Hyundai A-League, there’s no doubt Toivonen and Fornaroli are two of the best the competition has seen.

You would shutter to think where Victory would be this season if not for the influence of their skipper and Swedish international Toivonen.

The 33-year-old has scored of Victory’s six goals for the campaign and has been directly involved in nine of the side’s last 10 goals in the Hyundai A-League.

“He’s such a quality player and it’s so good to watch him play.”

Since joining the Navy Blue at the start of last season, Toivonen has scored 19 goals in just 28 appearances in the Hyundai A-League.

If he can find the net in Saturday night’s blockbuster against Adelaide United, Toivonen would be the joint-second quickest to 20 goals, alongside Besart Berisha who also managed it in 29 games.While it’s an impressive strike rate, it doesn’t come close to Fornaroli who got to 20 in just 22 matches during his time at Melbourne City.

Speaking of the Uruguayan, Fornaroli is chasing another slice of Hyundai A-League goal-scoring history in coming weeks.

The 32-year-old has amassed 49 goals in his 75 games in the Hyundai A-League at both former club City and his current employers Perth Glory.

Berisha and Shane Smeltz both jointly hold the record for fastest to 50 goals, both getting to the mark in 79 appearances.

It means Fornaroli has three more games to get to the magical half century to set a new record on his own.

Could he do it in Saturday night’s Grand Final rematch against Sydney FC at HBF Park?

Diamanti the shot king from distance

If there’s one thing that’s been a feature of Western United FC’s season so far it’s the sight of skipper Alessandro Diamanti shooting from outside the box.

The Italian star has a deadly left foot and oozes confidence, which is why he’s never afraid to let fly from distance.

Already this season, Diamanti has had 20 shots from outside the box, with only one player – Sydney FC’s Adam Le Fondre – having more shots in total from anywhere on the pitch.

The attacker is simply a player who needs no invitation to try his luck from far out, averaging 3.5 from outside the box per match with Serie B outfit Livorno last season.

United head to NSW for the first time for Sunday’s clash with Central Coast Mariners.

While Mark Rudan has been lamenting his side’s slow starts in 2019/20, the Mariners have led at the break in two of their last three matches in Gosford.

United failed to score in a Hyundai A-League match for the first ever in last weekend’s 1-0 loss to Newcastle Jets.

But history suggests they won’t draw a blank two matches in a row, with the Mariners going 38 successive games without keeping a clean sheet, the longest drought of any team in the competition.

Why Wanderers should be fearful of Maclaren

Melbourne City’s Jamie Maclaren is the hottest striker in the Hyundai A-League right now with a phenomenal seven goals from just three appearances this season.

And you would expect him to keep his amazing goalscoring run going against an opposition in Western Sydney Wanderers that he simply loves playing against.

The Caltex Socceroos striker has played 11 times against the Wanderers in the Hyundai A-League, finding the net an impressive 10 times in that span.

Only Besart Berisha (12 goals in 18 games) has scored more times against the Wanderers since they entered the competition in 2012/13.

Maclaren has never come up against gloveman Daniel Lopar in that time though, with the Wanderers gloveman boasting a save percentage of 81%, the most of any keeper in the league.

And the Wanderers are a far tougher nut to crack in 2019/20, with their four goals conceded the fewest in the Hyundai A-League.

City will be hoping Maclaren can continue his recent record in front of goal, having struggled away from home against the Wanderers.

They have managed just one win from their previous 11 away games against the Red and Black, with seven defeats in that run.

History against Glory getting GF revenge

Perth Glory players have spoken about the prospect of getting some payback on Sydney FC for last season’s penalty shootout defeat in the Grand Final.

But if the past is anything to go by then Tony Popovic’s side may be left disappointed.

Only twice in Hyundai A-League history has the team that lost the previous season’s decider been able to turn the tables when the same sides met the first time in the following campaign.

Glory also have a poor recent record against the Sky Blues, winning only one of the last 12 meetings between the two clubs, losing the other 11.

If the home side are to have some joy they will probably want to shut down their former player and hometown star Brandon O’Neill.

The classy Sky Blues midfielder has amassed three assists so far in 2019/20, the most of any player in the Hyundai A-League.

Why there could be a goalfest at Westpac Stadium

Wellington Phoenix and Brisbane Roar are the two lowest scorers so far this season, there’s something about this fixture recently that has delivered goals.

In the last three games between Phoenix and Roar at Westpac Stadium there has been 15 goals scored at an average of five per match.

Roar certainly head into this one in better goalscoring form, having put four past Melbourne City last weekend.

But all of those goals came after the break, with Robbie Fowler’s men the only team in the Hyundai A-League yet to score a first-half goal.

While Roy O’Donovan is their chief scorer (with four for the season), Jay O’Shea is the main creative force.

O’Shea has created 20 scoring chances so far this campaign, more than any other player in the competition.