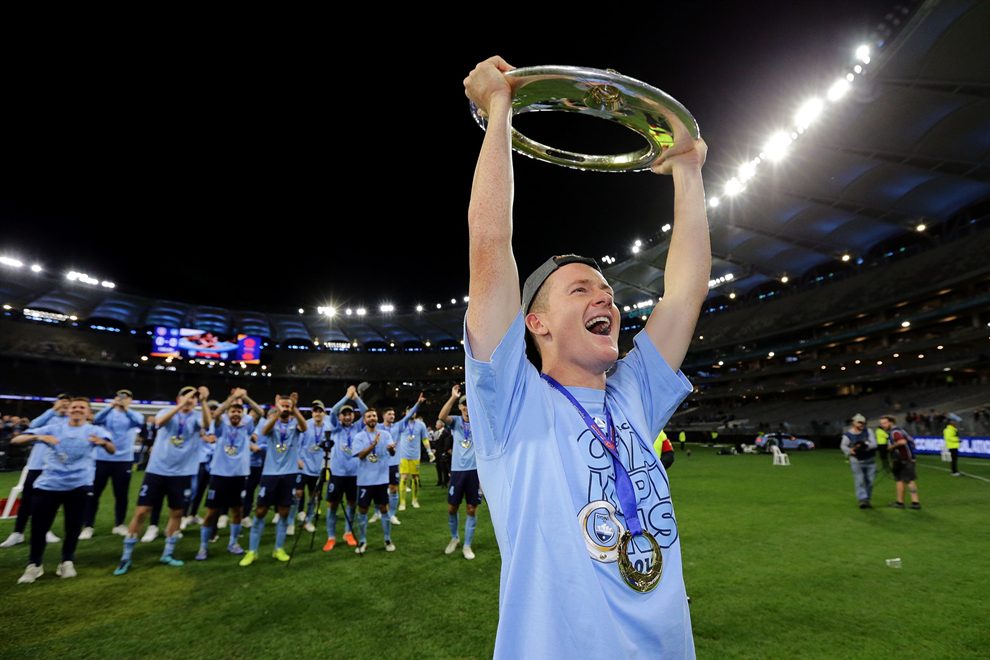 There are two fixtures Sydney FC midfielder Brandon O’Neill looks out for whenever the Hyundai A-League season draw is released.

The first is the Sydney Derby against Western Sydney Wanderers. The second is the club’s away trip to Perth, the club of O’Neill’s hometown, where he began his career and where his family and friends remain.

That annual 4,000km venture back to the Western Australia capital is only growing in importance for the midfielder. And this Saturday’s Grand Final rematch is shaping up to be the most exciting and emotional return home for the 25-year-old yet.

O’Neill made his professional debut for Glory in 2012 but only made four starts in his four seasons with the club before joining Sydney in 2015.

He is glowing in his praise of the former National Soccer League powerhouse, which has been something of a sleeping giant in the Hyundai A-League since the turn of the decade.

But the arrival of Tony Popovic last season saw Perth break club records left, right and centre, and steamroll their way to their first ever Premiers’ Plate and qualify for the AFC Champions League.

“It’s incredible to see how far they’ve come. I want to congratulate them on that,” O’Neill told a-league.com.au.

“Perth, being a one town team, their success and ability to perform on a weekly basis drives football in WA. And for WA now to have a team that is successful it only grows the game more.

“It’s exciting. I get excited now that I can get home and people of Perth are buzzing about football again. It’s awesome.”

O’Neill’s parents are from Dublin, Ireland, but the Sky Blues maestro was born in the WA-capital and played his youth football for the likes of ECU Joondalup and the Football West academy.

Since arriving in the Harbour City four years ago, he has won five titles, become one of the Hyundai A-League’s premier midfielders and made his Caltex Socceroos debut against Korea Republic in June.

With Perth rediscovering their competitive edge and hungry to exact revenge on last season’s dramatic penalty shootout defeat, O’Neill knows he and his Sydney side must be at their best.

But there’s no question he’s relishing the challenge.

“I really enjoying going home and people thinking that Perth might get the upper hand on us, because that only drives us more to get the result,” O’Neill said.

“When that happens, I get more excited because I know we have a chance of doing that.

“But I also know I have a chance of doing that in front of family and friends, so it’s a little driving point for me to go home.

“I know there’s a massive gang of us back there of O’Neills in Perth that will always be there for Sydney FC versus Perth.

“We’ll have a little cheer-squad for Sydney. That’s a little driving point because now that Perth have rediscovered themselves as a very good team.

“It excites me even more to go over there challenge them, beat them and then celebrate with family and friends.”

Perth could be even better than last season – Wilko

Sydney FC stalwart Alex Wilkinson is tipping Perth Glory to grow even better over the course of Tony Popovic’s second campaign at the helm.

Glory players very clearly rallied behind the taskmaster’s approach last season and Wilkinson believes they could rise to new heights despite what has been an indifferent start to the club’s Premiers’ Plate defence.

“Popa’s notoriously very good at assembling competitive squads and being very successful in the A-League,” he said.

“…everyone will be a bit more used to how he works and his methods. That could bode for the players being more successful. I’m sure they’re going to be up there.”

Stats preview: The incredible goalscoring strike-rates of Fornaroli and ‘world-class’ Toivonen
‘You should probably retire’: How Djulbic ignored the odds to make rapid injury return
Comment