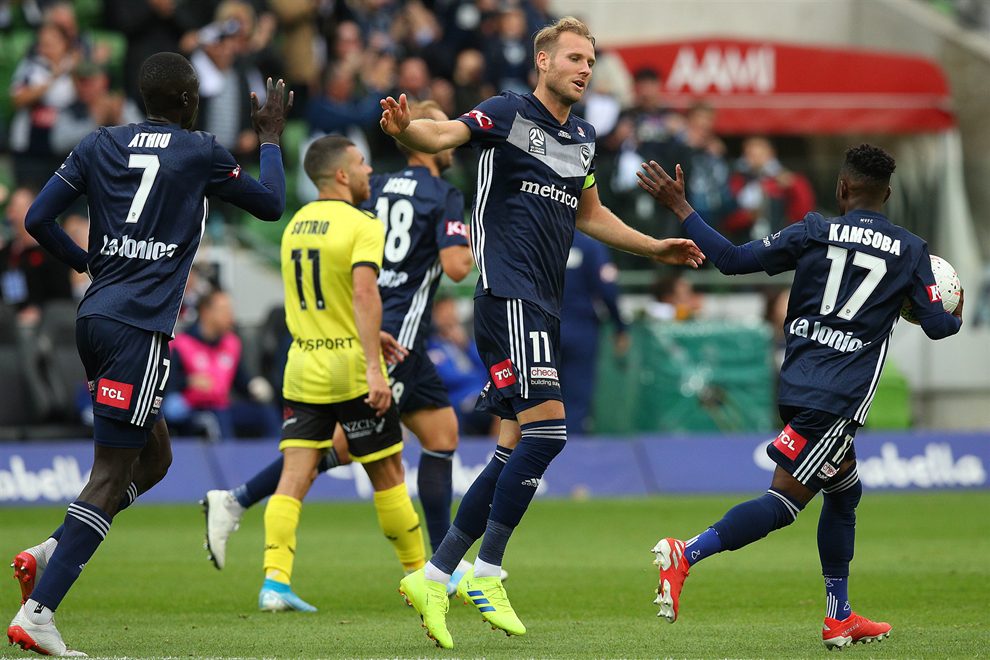 The Victory skipper was involved in all the big moments at AAMI Park, with his inadvertent handball gifting Phoenix a fifth-minute penalty, converted by Ulises Davila.

Toivonen squandered a gilt-edged chance as the hosts piled on the pressure after the break before a moment of magic earned Victory a share of the spoils.

Picking up a loose ball in the box, Toivonen danced past a couple of defenders before clipping a sensational finish past the keeper to level the scores.

Both keepers pulled off incredible saves late on to ensure both sides took away a point from a thrilling Remembrance Round clash.

The result means Ufuk Talay has picked up his first point as Phoenix boss and snaps the club’s six-game losing streak.

Victory have still managed just one win for the campaign ahead of their trip to Sydney next weekend for a clash with Champions Sydney FC.

Early VAR drama as Phoenix get a penalty

After a corner into the box hit the arm of Victory skipper Ola Toivonen, referee Adam Kersey awarded the visitors a penalty after consulting the VAR.

And Ulises Davila coolly sent Lawrence Thomas the wrong way, placing the ball in the left corner to give Phoenix the perfect start on five minutes.

It was the Mexican’s third goal of the campaign so far.

As the hosts upped the pressure before the break, Phoenix gloveman Stefan Marinovic was forced into a huge save to keep his side in front.

Victory worked the ball nicely on the edge of the box, with Jakob Poulsen looking to place a first-time shot into the bottom corner.

But Marinovic – who has made more saves than any keeper so far in 2019/20 – produced a sharp save down low to his right.

Adama Traore got some rare space down the Victory left and delivered a delicious cross into the box where Toivonen was lurking.

While the Swedish star managed to get free of his marker, he didn’t get enough purchase on his close-range header, with the ball glancing just wide of the far post.

The Victory skipper made up for his earlier miss midway through the second half with a piece of individual brilliance.

After a ricochet lands at Toivonen’s feet inside the box, he skirted past a couple of defenders before dinking a sublime finish on the angle past Marinovic.

With Victory piling on the pressure, Phoenix almost stole all three points in the dying minutes.

Alex Rufer’s curling shot appeared destined for the far corner until Lawrence Thomas dived across to his left and punch the effort clear of his goal.

CHECK OUT ALL THE STATS IN THE MATCH CENTRE