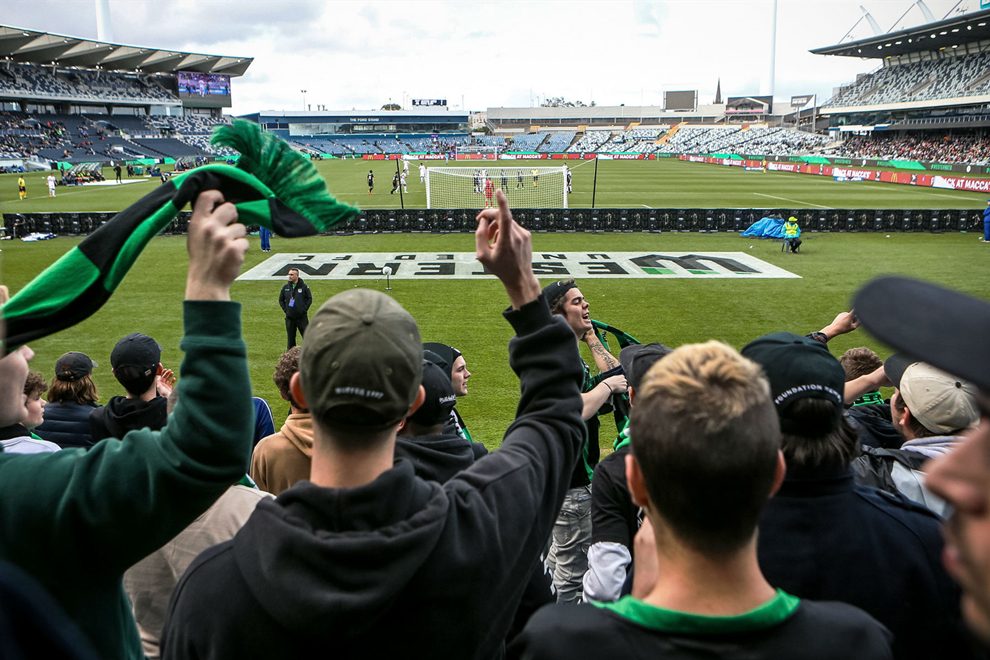 As the Hyundai A-League’s two newest clubs meet for the first time in Round 5, fans of Western United and Western Sydney Wanderers have been reflecting on their journeys to the present day.

Seven years further down the tracks compared to newcomers United, Western Sydney once felt like the outsiders but grew into one of the Hyundai A-League’s most unique clubs.

In a timeline almost too good to be true, they spawned in the shadows of the city rivals, Sydney FC, won the Premiers Plate in year one and went on to become the first Australian team to be crowned AFC Champions League winners.

However, through four games, Wanderers had only just recorded their first win, 1-0 against Brisbane Roar, and they had four points on the board. At this same stage, Western United have seven.

Every newcomer charts their own path and creates their own history. Many fans pulling on the Green and Black colours for the first time are just happy they have made it.

“I feel that we’re underrepresented. I’ve finally found myself an A-League team!

“It’s been pretty good so far. I didn’t expect that. I thought it would be a slow start but we’re not doing badly.

“I think we can be pretty big. If we can get into the whole west and keep pulling out wins like beating Victory 3-2 then why not?”

For Shane Trimbull, Western United are making great strides on and off the field only four weeks into the new season.

“I’ve always tried to get into an A-League side, but I’ve never been able to get into it,” Shane said.

“Now we have a team that’s local, home-based, I want to get around it. I want to support the boys and get in on it.

“It’s been mental so far. It’s just a family. It’s hard to explain. How many weeks have we been playing? You can see the progress within our fans.

“We slapped a team blokes together a few months ago and we’ve got a base like this right now.”

“It wasn’t like this last, or the week before that. You can see the progress.”

“To be honest, it just something new. It’s something for everyone in the west to get a hold of,” said James.

“I’m from Geelong, I think it’s good that everyone has gotten around it so quickly and it’s only going to be more exciting as we move forward.

“From the ground up it’s good that Western United have engaged the local community.”

It’s easy to believe that Western Sydney Wanderers became an Australian powerhouse overnight but supporter Michael Turner knows it was not that easy.

“In the first season of the Wanderers, apart from the derbies, most of the crowds were quite normal, quite average,” Michael recalled.

“Some of the games, the RBB was just one bay. It was a real parochial feel.

“Everyone was going nuts, going crazy, because it felt like we were a small part of something bigger. As the season went on it started getting bigger and bigger.

“I still remember it was a game we played against Brisbane Roar and there was 6-7,000 at that game. Heaps of the bays were empty, but we still thought ‘this is pretty cool’.

“We won that game and then went on a 10-game winning streak.”

“The first few games we were just happy to have a team.”

It takes time and effort to build a connection between team and fans, according to Nick Koloski – and it’s never going to be a smooth ride.

“I’ve lived out in the west for three-quarters of my life so I consider myself a Westie. I love it, I’m proud of it,” Nick said.

“It was good to see a group of players doing it out on the pitch in the Western Sydney way. You start from nothing and you build yourself to be successful, which is what a lot of people would have done coming to the west many years ago, so the club and the players are a reflection on ourselves.

“We’ve had a few horrid seasons. We had to move, we had shockers, we had managers come and go.

“We had our most successful manager leave us a week before a season started. Now we have this [Bankwest Stadium].”

“It takes time, it doesn’t happen overnight, you just have to stick with it.”

Wanderers supporter Josh Stevenson can see similarities between what the Red and Black went through seven years ago and Western United’s early progress.

“They look like they’ve got a core group of members and a good solid crowd,” said Josh.

“I think that’s something for them to build on once they start winning some games and getting some points on the board.

“Word of mouth spreads, people bring their friends and then it builds into something bigger.”

From bricklayer to the Hyundai A-League: Ryan Scott earns deal with Western United FC
Hyundai Ins and Outs – Round 5 (Remembrance Round)
Comment