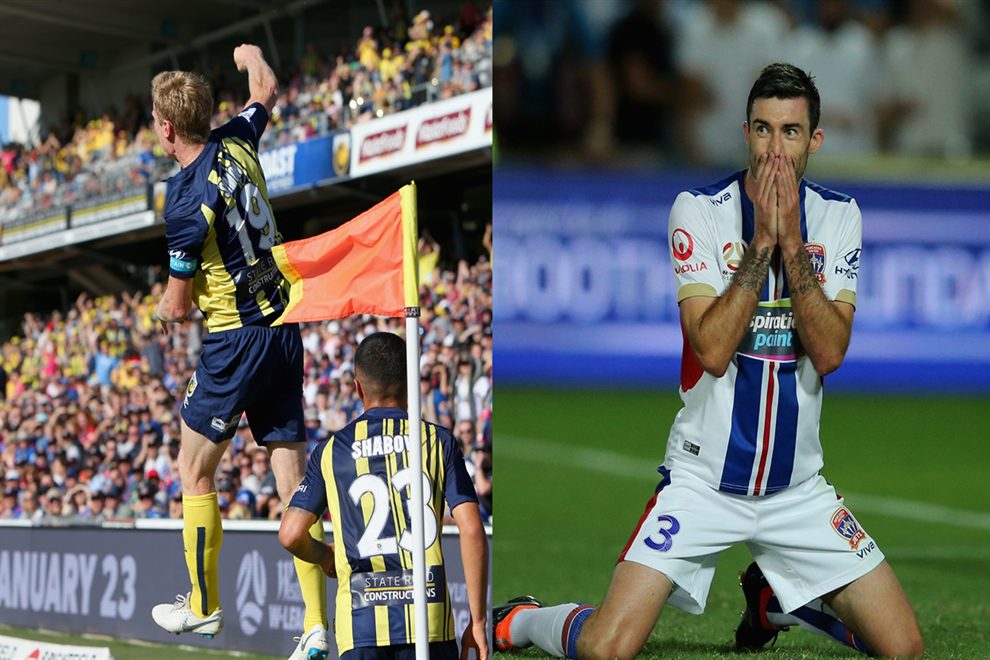 Central Coast Mariners and Newcastle Jets players have had plenty to say ahead of Saturday’s highly-anticipated F3 derby.

One of the Hyundai A-League’s oldest rivalries, the fixture is set for its 48th instalment this Saturday night in Gosford.

Of the previous 47 battles, Newcastle have prevailed 16 times and the Mariners have won on 15 occasions.

That record, the desire to win local bragging rights, and the hunger to put a marker down for the rest of the season, makes Saturday’s match a must-watch.

“It’s obviously a special game and it’s something both sets of supporters look forward to,” said Newcastle defender Nigel Boogaard.

“I always like coming up against Simmo (Mariners captain Matt Simon). We’ll always shake each others hand before the game but after that we’re best of enemies.

“It’s always exciting to know you can go 90 minutes full-leather against your best mate, it’s all because both of you just want to win.

“There’s always been passion there from day dot, from year one.

“There’s still rivalry there and a mutual hatred among fans… it’s a big match to have bragging rights over your local neighbour.”

Simon, now in his tenth season with the yellow and navy, knows how much the match means to everyone involved.

“It’s a massive game on the calendar personally,” Simon said.

“I always make sure I let the boys know it’s a huge game for the fans.

“It’s the original derby of the A-League and it’s one to look forward to.”

Mariners goalkeeper Mark Birighitti is due to line up for his first derby in Mariners colours having previously spent four campaigns with the red and blue of Newcastle.

“Tactics, positioning and video analysis you do during the week goes out the window,” he said.

“It’s whoever wins the individual battle come game day fighting for one another; whichever team does that will get the bragging rights.”

After a first round bye, Ernie Merrick’s Jets are raring for Saturday’s season-opener and centre back Nikolai Topor-Stanley knows just how important it is for his side to kick off their campaign with a win.

“It’s no different for both clubs, it’s a game we desperately want to win and get off to a good start,” Topor-Stanley said.

How about the bantz from @NewcastleJetsFC 👀 pic.twitter.com/WZZVPMM6iS

“I want to smash the Mariners every time we play them,” said Newcastle’s local boy Jason Hoffman.

“Being the derby any new player will understand in the first five or ten minutes there’s something special on the line,” Hoffman said.

“The F3 Derby is obviously a huge fixture for any Novocastrian.”

“There’s only one thought when the game is on… we need to beat them,” added Newcastle Jets CEO Lawrie McKinna.